If there is one thing I have learned my five decades and counting, it is that for the giver as well as the receiver, forgiveness matters. Forgiveness is huge. It can change your life.

It’s also really, really hard.  At least for me.

You see, I have this very unattractive side to my personality, a piece of me that can be proud. And kind of stubborn. And certain I am mostly right most the time. Or at least justified.

Probably you’re different. I really hope you are. I hope that seeking, asking, and granting forgiveness is as easy and natural for you as drinking a glass of water or breathing.

If that’s the case, you probably don’t need to read this post.  You’re excused. Go check out one of my recipe posts instead. The healthy Hawaiian pizza one is good. Or maybe the DIY Spa Gift basket.  That’s fun too.

But if, perchance, forgiveness is an area of struggle for you, stick around. I want to share four sentences, with twelve words total, that can put an end to that struggle. It will truly change your life.

Also, I want you to really take some time and think about this stuff.  Read it slowly. And tune in next time. Because these four sentences can change your life.

How do I know this?

Admitting your own guilt is the first step in seeking forgiveness. I think it’s also the toughest step, and the most necessary. You can’t really seek forgiveness if you aren’t willing to admit you’re in the wrong. And that is something people really do not like to do, especially in this age and culture.

Think about it. If you’re in a car accident, what does your insurance company say you must never, ever do? Tell the other driver it was your fault. If you’re involved in a lawsuit, your attorney will probably advise you never to admit guilt, not even partly.

And if you’re involved in politics? Well, I’m not going to get into that. (And aren’t you relieved? Me too.) But the fact that we’ve gotten to a place when words like “compromise” and “negotiation” have become dirty words speaks for itself, I think.

For a lot of people, admitting they are at fault, even partially, is considered a sign of weakness and must be avoided at all costs.

But remember that phrase we grew up with? “It takes a big man (or woman) to admit he (or she) is wrong.”  I still think it’s true.  If you want to be a woman of strength, be a woman who is willing to confess her faults.

Now, there are some people who have the opposite problem. These are the people who think that everything bad that happens is always their fault. Always. That kind of thinking is just as messed up as thinking that nothing is your fault. Ever.

You shouldn’t feel guilty or take responsibility for things that aren’t your fault. Nor should you say you’re wrong when you know you are in the right, just to keep the peace. It’s okay to stand up for yourself and your beliefs when you sincerely know you are right.

But when you are wrong (and everybody is sometimes) admit it. Don’t explain it. Don’t justify it. And don’t – whatever you do – add a “but” to the end of the sentence.

Now, sure. Maybe there were extenuating circumstances. And maybe the fault was only partially yours. That’s fine. There may be a good time and place to discuss those aspects later. But now is not that time.

Saying, “I was wrong but…” is a cop out, just a way of trying to look contrite while actually shifting blame to the other guy. So don’t do it.

Instead, open you mouth, say, “I was wrong,” and then shut it.

I know this can be hard. Believe me, I know. Especially if you’re out of practice.

But it can also be incredibly freeing, the first step toward unburdening yourself, as in – ridding yourself of the burden that has been weighing you down.

Admitting that you’re wrong can be the emotional and spiritual equivalent of taking off a seventy pound backpack.

So good. Such a relief.

Telling someone you are sorry is definitely linked to saying you are wrong, but it’s not the same thing.

When you tell someone you are sorry, you’re letting them know that you genuinely regret what you did. Because you regret your actions, the implication is that you will earnestly try not to do it again.

It’s not a guarantee that you won’t – sometimes it can take a while to break a bad habit – but when you tell someone you are sorry, you’re also saying you sincerely intend to do better in future.

By the way, if you’re not sincerely sorry, then don’t bother apologizing. Really. Nobody is fooled by that.

When my kids were younger, they tossed out the “I am sorry” line on a regular basis because they thought it would get them out of trouble. It didn’t. It just made me mad. Once, when one of my sons said he was sorry, I yelled, “Don’t be sorry! Be different!”

Not one of my finer parenting moments but it got his attention.

It’s a strange thing but often, when we are asking someone else for forgiveness, we actually leave this part out.  Crazy, right?

I mean, if you’re going to ask someone for forgiveness, you need to ask the question. After all, the end goal of apologizing is reconciliation, yes?

But here is the thing about reconciliation – it’s a two way street.

Asking forgiveness is not guarantee of receiving forgiveness. I think that’s why a lot of people skip this part – because it feels risky.

The truth is, it is risky.  Sometimes, even if you sincerely know you are in the wrong, sincerely sorry for your actions, and sincerely intend not to repeat them, the person you have wronged will refuse to forgive you.  And that hurts. It really, really does.

Now, I don’t know where you are as far as religious beliefs, but there’s a verse in the Bible that gives some really good advice no matter what faith you profess, if any. (Actually, there are a lot of those.) It appears in the twelfth chapter of the book of Romans.

“If it is possible, as much as depends on you, live at peace with everyone.”

Complete reconciliation is a two way street. You can’t predict or control the way the wronged party will respond to your request for forgiveness.  But you can do your part, as much as it depends on you.

That can be the beginning of a path to peace.

And the place the path leads? The fourth sentence? It is powerful. And so, so good. And truly will change your life. 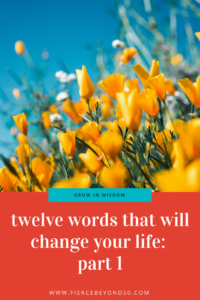