Last week was the summer solstice, which across the Northern Hemisphere means the longest day of the year. Which technically means every day between now and December 21 has a littttle less sunlight. But it also means that the days we are having right now are some of the loooongest of the year. And yes, the days are probably kind of hot. But it’s that beginning of the summer hot that still feels novel. And we still have clothes in our closet that aren’t drenched in sweat.

Remember being a kid, when we were out of school for the summer and how much possibility and opportunity lay in those long days? We might build a tree fort. We might invent a whole new game and teach it to the other neighborhood kids. We might turn on the sprinkler and run through the spray for hours in our swimsuits, laughing and giggling with no regard for time. After all, there was no homework nor other responsibilities that required watching a clock.

I certainly don’t build tree forts anymore and my sprinkler running days are likely pretty numbered. But I still feel the same possibility during the long days in the middle of summer. That anything can happen. A little magic in the air.

Personally, I think everybody feels it. The edges soften, the conversation lively but laid-back. There are so many backyard parties and outdoor bar-b-que’s during this slow season. And I’ve got exactly one of those on the calendar next week for 4th of July and I’ve been thinking about what I can bring that mirrors this slow, lingering feeling I have about these long summer days.

Then it hit me. I had even been to a friend’s house on Memorial Day and helped her prep the exact thing for a party of hers. Think a fruit and cheese board, with a patriotic spin!

Part of what I wanted out of an item to take to a friend’s July 4th party was something that lets people nibble on their own time. Bites you can sneak in amidst conversations and food that portable and can be eaten with one hand – a key at any outdoor event!

The best part about this party platter is there’s so much variety in what you can use. Basically, think of anything red, white or blue and you’ve got the supplies!

Since you don’t need much blue, we stuck to just blackberries and blueberries.

For the color red we again used a lot of fruit. Raspberries, strawberries and watermelon. Other possibilities would be cherries, red grapes or pomegranate seeds. Perhaps even some cherry tomatoes and red peppers to get veggies in there too! Also, if you’re wanting a charcuterie board you could include some salami or prosciutto to get some meat on the board. (And if pronouncing that crazy French word, charcuterie, is throwing you for a loop, click here for pronunciation.) I know, you’re welcome.

For white, well, we took some liberty with the color “white” because not too much in the food world is pure white. However, it turned out looking fabulous with a couple of blocks of cubed “white” cheese, some red delicious apples,  yogurt covered pretzels and a handful of marshmallows! Eek! We had been pretty healthy up to this point so we did throw in some snacks. But there are other possibilities – you could slice radishes, cut up a banana, use cauliflower or even some mushrooms!

She’s A Grand Old Flag (And Yummy Too)

There was much debate about how to lay all this out but in the end we used a cookie sheet so it had raised sides. Frankly, we would have preferred a large cutting board but she didn’t have anything large enough to contain everything comfortably so we went for something that ensured no patriotic debris on the ground.

We began with the blue in the upper left corner, and then chose a one of our reds to start out the bottom. Note, the top stripe and the bottom stripe are both red on the American flag. But, we ran out of space as we got to the top so we ended on white. You can call that our ‘artistic liberty.’

After that we just switched out red and white until we were out of supplies for the platter. 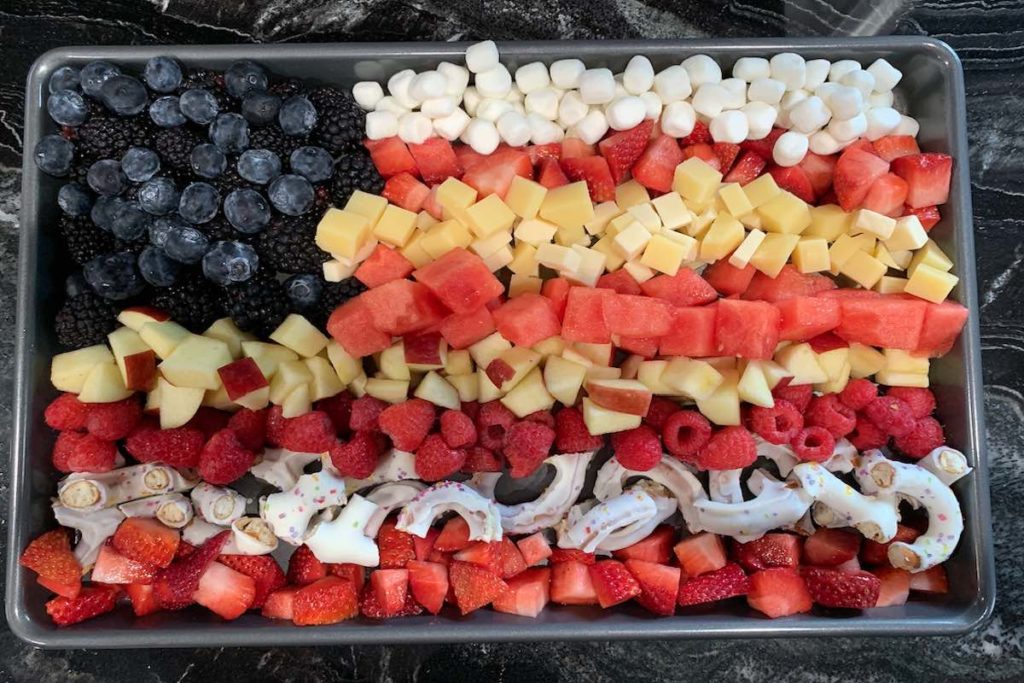 I think it turned out adorably – and it was a hit at the party! One thing we hadn’t considered was how anyone would serve themselves the food. But we pretty immediately noticed the dilemma (when we started snacking pre-party.) So we set out a small jar of toothpicks and the problem was solved before anyone else showed up.

Another thing to we considered was putting ice on a larger cookie sheet and nesting the small one in it to provide some cooling for the fruit from below. In the end it didn’t get that warm so we didn’t bother but it’s an idea I’ll likely revisit for July 4th.

Hope all of you are enjoying your long, lingering days of summer. If you’re looking for other ideas you can review my post from before Memorial Day about patriotic party decorations. 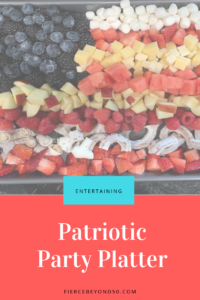 SIGN UP NOW
Previous Post: « Farm Salad with Roasted Carrots and Homemade Citrus Salad Dressing
Next Post: Diving Into the Deep End and Out of Your Comfort Zone »