This post may contain referral links. If you click through and take action, I may be compensated, at no additional cost to you.

A few months back, my doctor asked me the world’s dumbest question.

“Have you ever thought about losing weight?”

After smacking myself on the forehead to signal the sheer genius of her revelation, I exclaimed, “Why, no! Until this moment, the thought had never crossed my mind. Thank you, Doctor! Thank you so much!  This changes EVERYTHING!”

I mean, apart from those lucky few who are born with good genes and the metabolism of a rabid wolverine,who doesn’t think about losing weight? Weight loss after fifty is certainly in the minds of many of my peers.

But, I get it.  She was just doing her job.  And, as study after study shows, maintaining a healthy weight is one of the most important things I can do to avoid heart disease, diabetes, and a host of other health problems.  One of the less wonderful aspects of life beyond fifty is that I can’t afford to take my health for granted anymore. Maintaining the health that will allow me to continue to unleash my fierceness on an unsuspecting world requires consistent focus and effort.

Keeping off weight is a battle I’ve waged since I was a chubby child, mercilessly teased for being fat.  As I was writing JUST IN TIME, my next novel, to be released in late March of 2018, I drew upon those experiences when creating my main character, Grace, who grew up fat and felt invisible until she met Jamie, the boy who saw past her size and into her soul, making her feel not only visible, but beautiful.

Like Grace, I did lose weight. Doing so transformed my body and the way I felt about myself.  But keeping that weight off has been a lifelong struggle. Like a lot of women, I kept a few pounds after the birth of every baby.

Reaching my fiftieth birthday and being gifted with a middle-aged metabolism didn’t make things any easier. Every year, an extra pound or two crept on and held on, until I reached the point where even the “fat clothes” I kept in the back of my closet wouldn’t fit and my really smart doctor felt compelled to ask me a really dumb question.

Sure, I’d thought about losing weight.  I’d not only thought about it, I’ve done it. Several times. But the second I fell off the diet wagon, those five or ten pounds I’d lost came right back and brought friends.

Of course I wanted to lose weight. But was there a diet out there that really worked?

“There is,” Smart Doctor said. “Weight Watchers.  In my more than twenty years as a practicing physician, it’s the only diet plan I’ve seen that helps women take off weight and keep it off.”

I knew she was right. I knew from experience.

Those twenty-five pounds I lost at the age of the 13 and that transformed my then five-foot frame, were banished because I went on Weight Watchers.  It didn’t just change my body; it changed my attitude about eating and my relationship with food.

Not Your Mother’s Weight Watchers

Before I left the doctor’s office, I agreed to give Weight Watchers another try.

That was nearly three months ago. Since then, I have lost twelve pounds and drastically changed my eating habits.

Weight Watchers has changed a lot since I was a teenager! Back then, it was a glorified calorie counting system. It worked for me but the food choices were pretty limited and centered around things I don’t consider “real food,” as in, stuff I wouldn’t normally eat. That’s part of why I let it slide.

The latest Weight Watchers plan, called “Freestyle” is based on points, not calories. Depending on your age, gender, and weight, you are granted a certain number of “points” for food per day, with some extra weekly points thrown in for you to spend on special occasions.

The point value of each food is calculated by taking into account calories, carbohydrates, saturated fat, and protein, steering you toward healthier choices. So, even though two different breakfasts might have 300 calories, the higher sugar and fat choice, could use up 5 or even 7 points, whereas the no-sugar, high-protein choice might use only 3 points.  The new Freestyle Plan also lists more than 200 foods worth zero points, including most fruits and vegetables as well as eggs, fish, and even turkey and chicken breast.

The Empowerment and Encouragement I Need

You can also earn points for being active.  This has been very motivating for me and a good nudge as I’m doing my triathlon training. Activity points are calculated by taking into account the type of exercise, duration of the activity, and your perceived level of exertion. That, in a nutshell, is the program.

If it sounds complicated, that’s because it is.  But fortunately, the people at Weight Watchers have already done the heavy lifting.

All I have to do is type the kind of food into my computer or the Weight Watchers app on my phone, and the points pop up. I just press the tracking button to subtract them from my daily total.  Using the barcode scanner on the app makes it even easier. Scan the barcode on the package of any product and the points pop right up.  This is a big help when I’m grocery shopping.

Another plus about the new Weight Watchers is that I can do everything online. There are online connection groups if you want some community support without having to attend meetings but that’s an option if you want it.  Also, compared to other weight loss programs, Weight Watchers is very affordable. I paid about $55 for my first three months.  Another aspect I like about the website and app is that it’s easy to search for delicious, low and no point recipes for free.

I’m still a good way off from my goal weight and the real challenge will be in keeping the weight off once I’ve lost it. But, so far, I am finding the Weight Watchers program really helpful.  The plan is based on delicious “real” food but steers me into making healthier choices. I’m steadily losing a healthy 1-2 pounds a week without feeling hungry or deprived.

I really think I can do this! Weight loss after fifty might not be so daunting after all.

My doctor might ask some dumb questions but, lucky for me, she has some really smart answers. 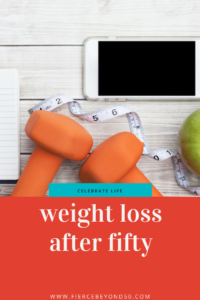