In my adult life, I’ve had more than twenty addresses. I’ve lived in ten different states in the US, and two states in Mexico.  I have moved a lot. If there is one thing I’ve learned from all those moves, it’s never to look in the rearview mirror.

That just means I try to focus on what is good about wherever I am, and not compare one place with the other. I loved my old home in Connecticut. I love my new home in Oregon. But I will admit that there is one aspect of living in Connecticut that I truly do miss – the five acres of land that surrounded our house. Though much of that acreage was hilly, our four raised beds gave me plenty of room for vegetable gardening.

My new home is smaller but still lovely. I designed every inch of it myself.  It’s also surrounded by lots of wooded common areas and mile upon mile of walking and biking paths. However, our lot is less than a quarter-acre, so there isn’t much room for gardening.  Also, the deer here are numerous and regard my garden as their personal salad bar.

However, I’ve come up with a three-part plan for small space vegetable gardening that will let me indulge my inner farmgirl and foil the deer. (I hope. Central Oregon deer are tricky. And determined.)

Part One of My Deer-Defeating Plan

The first part of my plan involved ordering a good-sized elevated planter. That would help me cope with the lack of space and discourage the deer, who don’t really relish the idea of walking onto decking. I’m not saying they absolutely won’t do it – but they’d rather not.

The first place I looked at was Gardner’s Supply. I was very taken by the VegTrug planters because they were big and were available with covers, which would serve as a second level of deer deterrent. (The more, the better.) But when I learned that the VegTrugs wouldn’t ship until August, I continued the search.

The two elevated garden beds I ended up purchasing from Home Depot fit the bill nicely. They’re four feet long and two feet wide, and made of untreated cedar so they should hold up well outside – safe for patio and small space vegetable gardening. I love that they’re elevated – no back pain when I’m planting or weeding!

I was a little bit worried when I opened the box. There were so many pieces! But each kit went together in about half an hour and required no tools. Having an extra person around to help hold the boards during assembly is a good idea but it was honestly pretty easy even by myself. 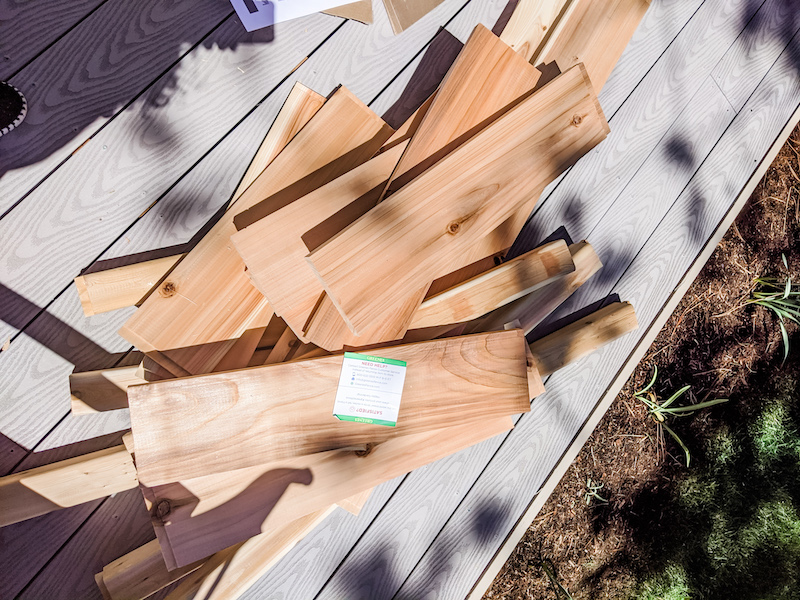 I filled my planters with a mix of one-third compost, one-third sphagnum peat, and one-third vermiculite. Those of you who already know about Square Foot Gardening will recognize those ratios. This is my first stab at square foot gardening but my sister (a Master Gardener) has used this method for years and swears by it. Try taking a look at this book to get some helpful tips for maximizing your small space vegetable garden. 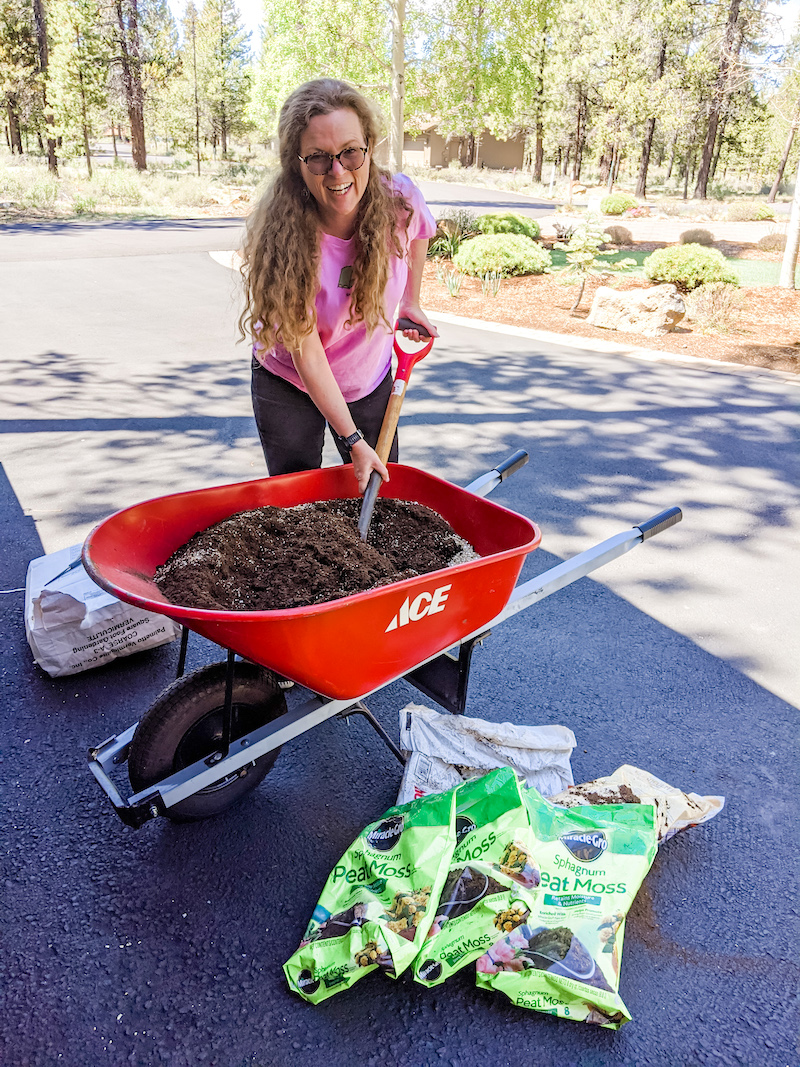 As I said, the thing I liked about the VegTrug was the option of adding a cover. The elevated patio vegetable gardening planters I wound up buying didn’t have such covers available. However, I came up with a plan to build my own covers that was easy and, if I do say so myself, kind of ingenious.

All in all, I was able to build both covers in less than four hours.

Having my planters on the decking instead of the ground and adding covers over the top of each patio vegetable garden planter should serve as a major deterrent to the deer. However, when it comes to deer in our area, there’s no such thing as too much deterrent.

The last element in my three-part plan to keep the deer away from my vegetables involves spraying liquid deer repellent on the area around and in front of our deck. I don’t mind the deer munching the bushes or trees so much, but I do want to discourage them from making lunch out of my flowers and vegetables. Hopefully, this will do the trick.

If all goes according to plan, I’ll be sharing photos of some beautiful vegetables within a couple of months. Stay tuned! In the meantime, if you’re looking for an in-home gardening alternative, I’d love to suggest my Indoor Succulent tutorial. 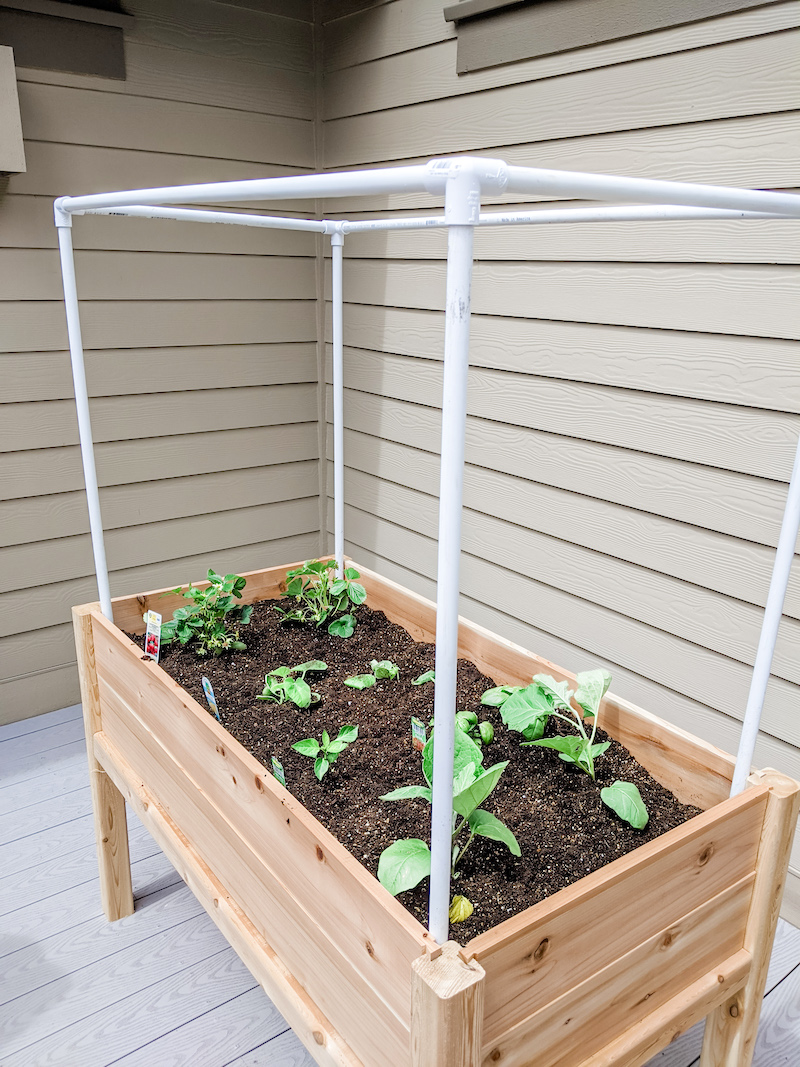