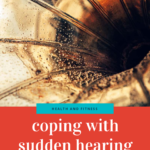 I can tell you the exact day, and pretty close to the exact time, when it happened.

On July 11th, 2016, at about 11am, my youngest son and I were on I-5, driving from Portland, Oregon to Salem, Oregon.  All of a sudden, in the time it takes to snap your fingers, I lost all hearing my left ear.

The change was instantaneous, highly noticeable, and accompanied by a sensation that my ear was full of fluid.

I was suffering from Sudden Sensorial Hearing Loss.

MORE COMMON THAN YOU MAY KNOW

I’ve chosen to be pretty open about my hearing loss. Partially so I can educate people about SSHL.  Also because, if I don’t respond to something they said, I don’t want them to think I was ignoring them. (Better to be thought deaf than rude, right?)

Practically every time I tell someone about SSHL, their face lights up and says, “Oh, yes! The same thing happened to my (insert name of friend, relative, acquaintance, or self here). It was really weird!”

To me, what’s really weird is how many people I’ve come across – hundreds so far – who have either suffered from SSHL personally or know someone who has, yet never knew what it was or sought treatment for it.

Obviously, my evidence is anecdotal, but these experiences have led me to believe that the incidence of SSHL may be vastly underreported.

If you’re over 50 and have had a hearing test recently, you probably know that a certain amount of hearing loss is a normal part of aging.

(You probably knew it even before you turned 50, at least in the abstract. But we went to those rock concerts and danced next to those giant speakers anyway because we were young and invincible.  And had a crush on the drummer.)

However, sudden sensorial hearing loss (sudden can mean instantaneous, like mine, or occurring over a few days) is not normal and not related to aging.  Most people experiencing SSHL are between 30 and 60 years old.

Earlier this summer I was buying a new phone charger and struck up a conversation with the store clerk, a man in his early 30s. Somehow, the subject of sudden hearing loss came up. He gave me a funny look and said, “Huh. That happened to me just yesterday morning. I figured I must just have a cold or allergies.”

Like me, his ear felt full. But when I asked him if he had any other signs of illness or allergies – fever, runny nose, nasal congestion, etc. – the answer was no.  His only symptom was a sudden hearing loss and that sensation of the ear being full.

Hearing that, I went into Full-Court Mom Mode. Looking him squarely in the eye, I told him that he needed to see a doctor, preferably an ENT (Ear, Nose and Throat specialist) as soon as possible.

Why did I push that young man to go seek medical treatment right away? So hard that, while I was standing there, he actually picked up the phone and called his doctor?

Because SSHL can be a symptom of other medical problems.

Some causes of SSHL can be relatively benign, such as a virus, autoimmune problems, or a burst blood vessel.  Even so, they still require treatment. Failing to do so could mean a potentially temporary loss of hearing becomes a permanent condition.

Also, some causes of SSHL can very serious. These include stroke, brain tumor, and Multiple Sclerosis.

Any sudden hearing loss should be treated as a medical emergency.

EARLY TREATMENT CAN MAKE THE DIFFERENCE

Early treatment is key to helping people suffering from SSHL to regain some or all of their hearing.

The front line response for sudden hearing loss is aggressive steroid treatment. It can be remarkably effective. One study has shown that 54.5% of people who get treatment for SSHL within ten days will regain at least some of their hearing.

Unfortunately, though I did get treatment quickly, I didn’t regain my hearing. But, with timely treatment, a lot of people do.  That’s why I’m committed to doing what I can to spread the word about SSHL.

After I lost my hearing, I wrote a short piece about it my monthly newsletter to my readers.  A few months later, I received an email from one of those readers that brought happy tears to my eyes.

Here’s an excerpt from that email (edited for brevity, anonymity, and emphasis).

Your newsletter arrived last week and I read it with interest. On Friday, I woke up in the morning with total hearing loss in my left ear. What a coincidence! I had sneezed 5 or 6 times the night before so I thought my ear was just blocked.

After showering I noticed that I could not hear at all on the left side.  Being the start of a holiday weekend, I took the yellow pages and looked for an ENT practice. After explaining my situation, they agreed to see me on an emergency basis.  An audiologist confirmed that I had lost my hearing on the left side.  I met with the doctor and I told him your story.  He said it was good that I did not wait until after the holiday to have this checked out.

After further examination, he put me on a course of steroids.  My hearing came back after a few days, and my follow up visit was today.  The audiologist did another series of tests, and I am back to 100% hearing.  The doctor was very interested in my story about reading about this situation in your newsletter. He said no one should ever wait to have something like this checked out.  I was lucky.

WHEN TREATMENT DOESN’T HELP, TECHNOLOGY CAN

The woman who wrote me that email was right. She was lucky.

The story didn’t end quite as happily for me. Short of a miracle (which I’m totally open to) my hearing loss is permanent.

However, technological advancements can make dealing with hearing loss easier.

Though cochlear implants have traditionally been used for bi-lateral deafness, studies are being conducted for their use in cases of single-sided deafness. After some investigation, I decided against going that route. However, it might be a good option for some people.

For me, the best option was CROS hearing aids.  CROS stands for Contralateral Routing of Signal.

Here’s what that means in English. I wear two hearing aids. The one in my deaf ear actually isn’t a hearing aide at all. Basically, it grabs the sound on the left side of my body, and then wirelessly transmits it to the hearing aide that’s in my good ear.

It’s not the same as having my hearing back. For one thing, it doesn’t help with directionality – everything sounds like its coming from the right, even when it isn’t.  Also, I am basically listening to the world through a microphone, so the sound quality is different.

I don’t wear them around the house, but when I’m out in public or in a group of people, my CROS hearing aids definitely help.

At first, I wasn’t convinced they did. However, when my audiologist tested me with and without the aids, I found that my word comprehension in the bad ear increased more than 70%.

Technology has definitely helped me cope with my hearing loss. As time goes on, I expect that improvements will help even more.

WHAT I WANT YOU TO KNOW

My purpose in writing this post is simply to use my experience to help others by spreading the word about sudden sensorial hearing loss.

If you or someone you know experiences sudden deafness, treat it as an emergency and get medical attention immediately.

It could save your hearing. It could even save your life. 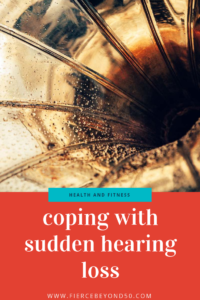