This post may contain referral links. If you click through and take action, I may be compensated, at no additional cost to you.

Today, I am making a huge and surprising announcement.

In 2018, I intend to enter and complete my first triathlon.

Okay, sure. In the grand scheme of things, this isn’t quite stop-the-presses news.  Hundreds of thousands of athletes compete in triathlons every year, I get that.  But, for someone like me, this is a very big deal.

From last place to first triathlon

When I was a child and it came time to choose teams for dodge ball, red rover, or virtually any game that called for even a drop of athletic prowess, I was the last one picked. Always.

I did join a local swim team in the fourth grade but the only ribbon I ever got was for sixth place in the breast stroke – sixth – out of six competitors.  Until they handed it to me, I didn’t know that award ribbons came in beige.

Hitting my adolescent growth spurt, I was actually pleased by my pediatrician’s diagnosis of Scheuermann’s disease (a spinal disorder) because it meant I was excused from P.E. forever.  Oddly enough, my aversion to athletic pursuits was at least partly responsible for launching my career as a novelist.

Twenty-five years ago, while on a vacation with some sporty girlfriends, I wandered into a writer’s workshop, not because I was interested in writing but because it seemed like a good way to get out of playing tennis.  (If you’re interested, you can read the whole story here, on my author website.)  Suffice it to say that the rest was history.

Until recently, the most strenuous thing I did in a given day was walking across the kitchen to refill my coffee cup.

And now I’m going to enter a triathlon? How in the world did that happen?

When we moved into a new home in Central Oregon last year, I was on deadline for a book and so everything, including unpacking, was put on hold. For a solid month, I didn’t do anything but sit at the kitchen counter and type.  Sometimes, for a change of scenery, I’d go work on our back deck, overlooking one of the neighborhood’s many miles of walking paths.

That day, there was a lot of traffic on the path. Hundreds of runners paraded down the pathway before crossing a nearby street where a handful of onlookers stood to cheer them on.

I was fascinated by the differences among the competitors and the fact that people of every size, shape, level of fitness and age were taking part.  There were a whole lot of gray heads passing by. I loved that.

I also loved that the onlookers stood guard until the very end and whooped and hollered just as heartily for the final runner, who limped along at a determined but very slow pace, as they had for the first.  By that time, I was whooping along with them.

It was fun to take part in the cheering section and inspiring to witness the culmination of what I knew had to be many months of hard work and training.

And I couldn’t stop thinking about it.

A quick online search told me that the runners had been taking part in the Pacific Crest Triathlon – an event that involved a 1500 meter swim in open water, a 28 mile bike ride, and a 10 kilometer run – a race of daunting distances.  Further research showed me that triathlons come in a variety of distances and that so-called sprint triathlons involve swims between 300 and 750 meters (some in a pool) bike rides of nine to twelve miles, and runs around five kilometers.

Six laps in the pool? Twelve miles on a bike? Three and a half miles of running?

Those distances were certainly nothing to sneeze at, but they seemed more challenging than daunting, the kind of thing that a person, even a dedicated non-athlete, might be able to accomplish if she really, really wanted to work at it.

For some inexplicable reason, I did.

It took a long time before I was willing to admit this, even to myself, let alone to other people.  After so many sedentary decades, was it really possible for me to take up such a fiercely athletic pursuit? More importantly, was it smart?

Would my knees hold out? Would my resolve? Did I even have time for this? Training for a triathlon is a big commitment of time. I had a book to finish writing and, as soon as that was done, another book to begin. I couldn’t just push that aside. After all, writing is how I make my living. Nobody was going to pay me to run, bike, or swim.

But I couldn’t stop thinking about it.

Saying it out loud

In late September, I told my husband of my intention.  Saying it out loud was a big step. It made it real.

And now I’m telling you, which is an even a bigger step.  Things are getting very real.

I’ll be sharing more about my triathlon journey in the weeks and months to come, taking you along for the ride. I can tell you already is that hasn’t been easy.  There are days when I’ve felt like this was a really dumb idea, but there have also been days when I felt really proud of what I’ve been able to accomplish so far.

At this point, it’s hard to know how this whole endeavor will turn out. Every athlete must consider the possibility that unexpected injury might prevent her from reaching her goal.  But whatever happens on race day, this experience has shown me that, in spite of getting a late start, I am an athlete!

What I was really wondering when I sat in that rocking chair, watching all those gray-haired runners stream past, was simply this: is it too late?

It wasn’t for me. It isn’t for you either.

Okay, sure. I can already hear some of you coming up with lists of things you’ve missed the boat on.  True – you’re probably not going to become an astronaut at this point and my Olympic dream has definitely passed.  I get it.  BUT, in most cases, if there is something you truly want to do, it’s not too late!

It’s not too late to do so many, many, many things.

Believing this with all my heart, and wanting you to believe it as well, every month in our Never Too Late feature, I’ll introduce you do an ordinary woman, one not so different from you, who has taken on a surprising challenge later in life. Their stories will inspire you, I promise.

Because even if you’re fifty, sixty, seventy, or beyond – it’s never too late to live a life that matters. 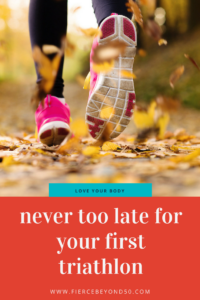 SIGN UP NOW
Previous Post: « How to Start Your Day (and The One Thing That Makes Everything Easier)
Next Post: Your Roadmap for the Best, Most Productive Year »